This is the second in a two-part blog exchange I’m doing with Denise Lee Yohn. Because we have similar perspectives on customer experience, we decided to share with our readers each others’ thoughts on disruptive experiences.  Last week, I discussed on Denise’s blog how Square is disrupting the payment experience.  In this post, Denise describes how Tesla Motors is disrupting the automotive buying experience.

Saturn may have used those lines to launch its brand 20 years ago, but it’s Tesla Motors who is truly disrupting the automotive industry today.

Saturn may have challenged the conventional designs of American-made cars, but Tesla has combined an electric powertrain and luxury sports car style into a new breed of automobile unlike anything seen before.  Saturn may have instituted a different culture and organizational design, but Tesla is run by Silicon Valley entrepreneurs and engineers whose tech start-up sensibilities contrast sharply with those of automakers.  And Saturn may have trained dealers in low-pressure sales and encouraged them to pay salespeople salaries rather than commissions, but Tesla has set out to fundamentally change the car buying and owning process. 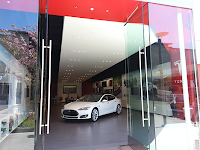 It is this last point that I find most noteworthy because the automotive customer experience is in dire need of change, and Tesla seems to be re-designing every aspect of it.  As Chairman, Product Architect, and CEO Elon Musk explains, “At Tesla Motors, we really want to improve aspects of the car business that we’ve found unpleasant as consumers.”

The company is disrupting the automotive shopping experience in five significant ways:

1. Customer decision-process: Tesla’s stores and galleries are located in venues with high foot traffic and visibility like high-end malls and shopping districts, including San Jose’s Santana Row.  Of course the company enjoys the brand halo that comes with such aspirational adjacencies, but its strategy has a more fundamental objective.

In mainstream shopping areas, the company can generate broader brand awareness than its start-up ad budget could produce – and it can reach people before they’re even considering buying a car.  The company knows it’s important to reach people at such an early stage in their decision-process because they need to be educated about electric vehicles before they’d be open to Tesla as a brand for them.
Critics question if shopping malls are the best venues to reach qualified buyers – and indeed, I imagine Tesla stores get more than their fair share of lookie-loos.  But if a retailer wants to connect with new customers and get them to add the brand to an established consideration set, it can’t expect to be a destination – it needs to be where the brand can be discovered.

2. Role of salespeople: Given the prevalence of online research in today’s automotive purchase process, most people have already decided what car they want to buy before they head to their local dealer – and many already know the fair price for it.  So car salespeople’s roles have been reduced to Vanna White-type product demonstrators and price negotiators.

But Tesla’s salespeople, “Product Specialists,” play a far more significant role in the customer journey.   They’re focused on educating people first about electric vehicles in general and then about Tesla specifically.  So they’re not paid on commission and their goal is to increase demand, not close a sale.  Tesla’s vice president of sales and ownership experience, George Blankenship, says that it’s their goal for “everyone to leave our stores with a smile on their faces.  I want people to want the car, I don’t want to sell them the car.”

3. Controlled and designed experience: Other automakers have franchise contracts with independent companies that sell vehicles to their respective dealerships. The dealers hire and train the sales and service staff and determine their pay, and they set the sales price of each car. Thilo Koslowski, an automotive analyst at research firm Gartner Inc., explained the risks involved with the established model, saying, “Every time you have a franchise involved you lose part of that intended customer experience because they are independent businesses and have different goals. They use different processes and sales strategies with customers.”

Since Tesla sells directly to consumers through their stores and website, it retains control of the customer experience. And it has designed the experience to be like an Apple store, a Starbucks, or a good restaurant – a comfortable place where people feel welcome and want to hang out.  Musk describes the store design as “beautiful and stylish, but also simple, fun, and friendly at the same time.” 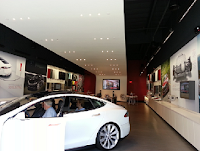 4. Experiential and emotional appeal: Blankenship explains that the stores are intended to “entice, inform, and engage” people in order to “create a highly interactive buying experience.”

Usually one or two cars are showcased in the center of the store and people are e
ncouraged to get into them to form an initial impression.  Car design options are displayed and lit dramatically on the walls, while other displays highlight various aspects of the cars such as the motor and charging socket.  People can interact with one of a few large flat-screens with touchscreen capability that serve as in-store design kiosks through which they can customize their own car – and eventually make a reservation to purchase it.   And prospective customers can test-drive one of several cars that are stored in a designed parking area nearby.

The company aims to “put as much energy into making our stores look good as we do with our cars,” wrote Musk.  The idea of a store being one of the most powerful expressions of a brand is one I’ve explored before and Tesla certainly proves how impactful a store can be in terms of emotional expression and connection.

5. Consistent brand standards: Tesla has torn down the invisible but unmistakable wall between the sales and service standards that people encounter at most car dealerships.   Instead of presenting an inviting, glamorous sales experience and a functional, generic service one, Tesla designs its service centers to be inspiring and interesting.  In fact, Musk described how they’re modeled on the private VIP lounges for airline frequent fliers.

I suspect that the sales and service businesses are managed separately in other automotive retail networks. With their distinct objectives and operations, it’s no wonder that what the customer experiences in one area bears little resemblance to the other, and there’s limited, if any, consideration given to fostering a connection between the two.  But, applying the highest brand standards to every experience is what distinguishes Tesla and other extraordinary retailers from their rivals.  They design their businesses with the brand vision at the center and ensure there are no disconnects across experiences.

Tesla’s disruptive strategies have not been welcomed universally.  Due to perceived unfairness to other dealers, the company was denied a special exemption that would have let it operate a dealership in the state of Virginia.  It’s unclear whether or not the company will encounter similar barriers as it expands into more markets.

This setback demonstrates how difficult retail disruption can be.  Visionary entrepreneurs like Musk, Warby Parker co-CEOs Neil Blumenthal and David Gilboa, and Zappos CEO Tony Hsieh, conceive of radically new ways of doing business in service of providing more inspired experiences for customers.  But, old systems and established brands resist change.  Let’s hope Tesla and others keep fighting for it!

Denise Lee Yohn has been inspiring and teaching companies how to operationalize their brands to grow their businesses for 25 years.  World-class brands including Sony, Frito-Lay, Burger King, and Nautica have called on Denise, a brand-building expert, speaker, and writer.  Read more by Denise at http://deniseleeyohn.com/bites/best-bites.