Were you one of the hundreds of thousands of people who downloaded Beyonce’s new album last week?

Let’s take a closer look at this recent phenomenon.

Unless you were hiding under a rock last week, you probably heard that Beyonce released a new album digitally to her fans, in the dead of night, without any prior leaks, announcements, marketing, or other hoopla. As a matter of fact, it was said that fans weren’t even expecting an album from her until 2015. Instead, she announced the new album via Instagram at 9pm PST a week ago. Shock and awe! Surprise and delight!

A Raving Fan Base
First of all, I’m reminded of someone else with a similarly raving, and extremely loyal, fan base: Lady Gaga. Lady Gaga calls her fans Little Monsters and has her own social media site, just so she can engage those fans and rally her community around a common message. Jackie Huba wrote Monster Loyalty: How Lady Gaga Turns Followers into Fanatics to pay homage to Lady Gaga’s incredible ability to build that community of, and for, fans, who are connected not only to her but to each other. 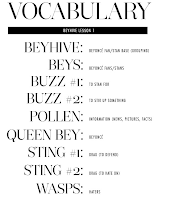 But did Beyonce just show that she can do the same? Or even better? Did Gaga get one-upped?

Maybe. Not in the volume of followers but just in the pure surprise and delight she just unleashed in her fans. Lady Gaga’s got her work cut out for her; I’m sure she won’t disappoint!

For those who don’t know (I didn’t), Beyonce has built her own community, called BeyHive. Think of the word play. It has a Queen, of course (Beyonce, right?!), different types of Beys (pronounced “bees”), and its own vocabulary. (See the graphic to the right.)

The community is her way to share “all the inspiring things I come across every day,” while at the same time allowing her to feature “beautiful creations from my talented fans.” Beys also get early access to concert information, presale tickets, VIP packages, and more.

I had to look it up, but she refers to her fans as stans, which, according to the Urban Dictionary, means: an overzealous maniacal fan; it’s formed by combining “stalker” and “fan.” (I’m not sure that’s really a good thing, but I also didn’t just sell a zillion album downloads, so who am I to judge?!)

And finally, the Queen Bey has put forth her own Golden Rule of the community:

We protect our own. We are all beautiful. One Bey should never turn on another. We defend each other. Let love & respect guide you, and always be good to each other. Follow the golden rule, Beys!

Just a little background on her community. I think we all know the power of the community; if you’re not sure about that, I provided seven reasons raving fans are important in this post about cult brands.

Let’s move on to the next angle.

Criteria of a Great Customer Experience
I’ve written previously about what comprises a great customer experience. It must be:

Queen Bey covers all of these; it’s the reason she’s got the loyal fans that she has today. It’s one of the reasons this album release was a huge success. It’s what fans have come to expect from her. Don’t get me wrong (sometimes expectations can set, well, the wrong expectations), it was a surprise. She’s just raised the bar.

Marketing without Marketing
Having this community of loyal fans saved Beyonce a few dollars in her marketing budget, right? Seems that way. Providing a great customer experience means that customers come to expect great things from you. It means you don’t have to spend months and dollars figuring out how to position, place, or promote your product. You can focus more on the product and on the experience instead, as Beyonce did.

Consistently providing a great experience for your customers/fans yields a win-win for everyone in the long run.

Customer experience is the new marketing without marketing. As Robert Stephens of Geek Squad said (and I’ve used this quote often): Advertising is the tax you pay for being unremarkable.

Beyonce is remarkable. Her fans love her. They love her music. The experience she delivers through her concerts, her music, her BeyHive, social media, and more is exactly the reason this release was successful. She’s Beyonce. And if she puts out a new album, the Beys must have it.

The Power of Word of Mouth
This album was announced in a fun way on Instagram. Releasing this album digitally meant Beyonce was relying heavily on the power of social media and word of mouth. And the power of her community.

Her reasoning for releasing the album this way, rather than the traditional approach:

“I didn’t want to release my music the way I’ve done it. I am bored with that. I feel like I am able to speak directly to m
y fans. There’s so much that gets between the music, the artist, and the fans. I felt like I didn’t want anybody to give the message when my record is coming out. I just want this to come out when it’s ready and from me to my fans.”

I love that: imagine if brands talked more to customers than to or through the media. Would that lend a bit of realism, authenticity, trust?

What’s the power of word of mouth: if your customers love you, they’ll work for you; they’ll be an extension of your sales force. And it won’t cost you a dime.

The weird set an example for the rest of us. They raise the bar. They show us through their actions that in fact we’re wired to do the new, not to comply with someone a thousand miles away. -Seth Godin

Focus on the People and the Numbers Will Come

Is Yours a Cult Brand?