Talk to Your Customers!

Are you listening to your customers and really, really hearing what they’re telling you?

Don’t think that’s important? Then be sure to read all the way to the end of this post – the proof is in the pudding!

I got my hands on The Zendesk Benchmark Report for Q4 2013 this week. It’s a global report based on actual service and support interactions with 16,000 companies in 125 countries (using Zendesk to provide customer service). The key metrics Zendesk focuses on in compiling this report are customer support efficiency, customer self-service behavior, and customer engagement. Findings were reported by country and by industry.

Satisfaction scores, which are based on aggregated responses to a question about whether they were satisfied with the support interaction, by country didn’t vary much for the top 10 countries, with fewer than 10 percentage points separating #10 from #1. Norwegian customers were most satisfied.

By industry, retail and travel ended up toward the bottom of the heap during this crucial quarter for both industries. Surprising, though, are the industries at the top of the list: (4) education, (3) real estate, (2) government/non-profit, and (1) IT services/consultancy. Government? Real Estate?

Retail
Focusing on retail, we know that Q4 and the holiday season are critical for retailers. But satisfaction with the support they offered dropped not only from last year (2012) but also from the prior quarter. Zendesk took a closer look to understand this decline and discovered that ticket volume (and, hence, agent workload) increased 42% from Q3 to Q4 2013 – compared to 34% for the same period in 2012. The largest spike, not surprisingly, occurred from November to December. Retailers were clearly understaffed to handle the increased volume. 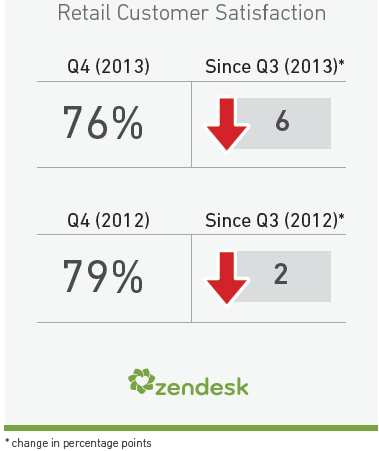 Success Stories
It’s not all gloom and doom. In the midst of it all, there are always success stories. I hate to call them outliers, but there are just those companies who tend to shine – those who get it. Those companies who shore up, prepare, and can turn on a dime to handle what gets thrown their way. Two such companies are Bonanza and NatureBox.

Bonanza is an online marketplace that saw a 35% increase in ticket volume during this period. In addition to educating and empowering their staff to become subject matter experts, they listened to customers and made some improvements to the shopping experience that reduced customer inquiries and, ultimately, ticket volume. Their improvement was a small one (letting customers know when to expect their purchases) but with a major impact.

NatureBox, a healthy snack delivery subscription service, saw a 46% increase in inquiries from their customers in Q4. They uncovered the root cause and improved their support processes to the delight of their customers. Rather than diverting all communications, regardless of the mode in which they were received, to email, they called customers. Lesson learned: contact your customers in their preferred modes or how they reached out to you initially. For NatureBox, those calls had the added bonus of relationship-building – and they were able to ask customers for feedback on how to improve the experience.

Imagine that – what a novel concept: Talk to your customers! And act on their feedback!

For NatureBox, the result is truly delighted customers – and a satisfaction score that is 20 points higher than the Q4 retail industry benchmark.

Do You Employ Actionability Thinking in Survey Design?

If a Tree Falls in the Forest…

Feedback Maps: Inventory and Make Sense of Your VoC Data