Should You Feel Empathy or Sympathy? Or… ? 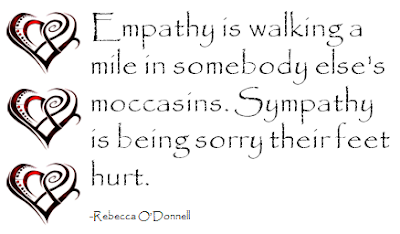 Do you know the difference between empathy and sympathy?

And when to use one over the other? Have you been using the terms – and the feelings – correctly?

There’s definitely a difference between the two, and I’ll provide examples to call out when to use one over the other. Or even when to use them together, which is often the case, but not always.

I’ll start with some definitions, as I often do.

I like how Hugh MacLeod depicted it in a recent Gapingvoid cartoon: “I feel your pain” vs. “I’m sorry you’re in pain.”

Know the difference, especially when customer experience professionals talk about the importance of empathy to the customer experience. In 2014, Bruce Temkin noted that empathy would be the CX word of the year. He added: As companies increasingly focus on customer experience in 2014, they will recognize that their organizations lack a deep understanding and appreciation for their customers. Granted, it is now 2016, but empathy is equally important, if not more so. Understanding your customers, their needs, what they are trying to achieve, and what they are going through is critical to delivering a great experience.

I’ll give you an example of the differences and how the two can be used together. I’ve mentioned in a few previous posts the insurance provider I’ve been dealing with now for the last six months. The adjuster that was assigned to me is just awful, so I finally got to the point where I didn’t want him to come to my house again without his supervisor. I’ve been in this situation before with my team: I know that if a client calls in a supervisor, it’s time to step up the customer love, acknowledge what happened, apologize, and figure out how to make things better, in a nutshell. Clients want both sympathy and empathy in those situations. So here goes.

The adjuster and the supervisor arrive. The supervisor – a woman and a mom – barely says, “Hello,” doesn’t look me in the eye (and didn’t really ever do this during the entire meeting), and doesn’t start off with something that I would say, were I called into this situation: “I’m sorry that we are not meeting your needs. How can I make this better?” Or simply, “I’m sorry. I’m here to help.” Those words – and no reasonable facsimile – ever came out of her mouth in the several hours that they were here. That would have showed sympathy.

At some point during the visit, we walked into my kitchen, which is basically non-existent. It had been damaged by a water leak, and all cabinets, appliances, etc. had been torn out. I have no kitchen. And there I stood, listening to the adjuster and his supervisor tell me that my house is livable. (By the way, the rest of my downstairs is gone, too.) I asked them both if they have children, and they do. I asked  them both if they would live in a house, with their children, with no kitchen. They both said they would, and they had, one for four months, the other for six. I’ll spare you what I said after that because the next 90 seconds were a blur of profanity and disbelief. (And having now done it for three months, eating out for every meal, every day, I can tell you, I don’t believe them.) I took a deep breath. I was asking for empathy. I wanted them to walk in my shoes, to know what it would mean to live in a house in the state mine was in. And while they said they knew, there was no “I feel your pain” moment. It was more of a smug moment. (How do I know they were telling me the truth? They’d been awful to deal with about everything else for the prior three months.)

What I got instead was apathy, which Merriam-Webster defines as the feeling of not having much emotion or interest. “I don’t care about you.”

Your customer experience has reached the low of lows when it gets to that point.

So, take the time to coach your frontline about all three, and make sure that the third one is the one they never use with your customers.

When you show deep empathy toward others, their defensive energy goes down, and positive energy replaces it. That’s when you can get more creative in solving problems. -Stephen Covey

What Role Does Intuition Play in Customer Experience?

The Good, The Bad, and The Ugly of Service Recovery