The 5 Whys: Getting to the Root of the Matter 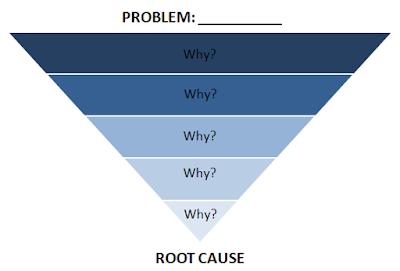 Have problems? How are you solving them so that they never happen again?

How are you getting at the root cause of any issues you or your customers are having? What types of root cause analyses (RCA) are you conducting? Or are you even thinking about RCA?

Conducting some sort of root cause analysis (and there are many different types) any time you experience an issue is critical, for the simple fact that you want to nip the issue in the bud and not have it occur again. Too many companies fix the symptoms and call it a day, only for the issue to occur over and over again. When you fix the symptoms, you’re applying bandages rather than curing the disease. Getting at the root cause and fixing that ensures the same issue won’t recur.

One of my favorite RCA methods is the 5 Whys. I like it for its simplicity. Whether that’s a good thing or not, I don’t know, but I do know that that simplicity allows people to really understand what it means to get to the root of the matter. It also helps you understand the relationship between different (root) causes. It’s a great tool to help you understand. Simple, quick and dirty, but powerful.

5 Whys is an iterative interrogative technique used to explore the cause-and-effect relationships underlying a particular problem. The primary goal of the technique is to determine the root cause of a defect or problem by repeating the question “Why?” Each question forms the basis of the next question. The “5” in the name derives from an anecdotal observation on the number of iterations needed to resolve the problem.

This method was developed by Sakichi Toyoda; it was adopted throughout Toyota Motor Corporation for a variety of uses, but specifically used during the development and evolution of its manufacturing methodologies.

If you don’t ask the right questions, you don’t get the right answers. A question asked in the right way often points to its own answer. Asking questions is the ABC of diagnosis. Only the inquiring mind solves problems. -Edward Hodnett

One of the problems with the 5 Whys to be aware of is that different people may come up with different root causes. I recently saw a post by Pete Abilla about his experience at Amazon, when Jeff Bezos conducted an impromptu 5 Whys session to understand why an employee hurt himself.

Why did the associate damage his thumb?
Because his thumb got caught in the conveyor.

Why did his thumb get caught in the conveyor?
Because he was chasing his bag, which was on a running conveyor belt.

Why did he chase his bag?
Because he placed his bag on the conveyor, but it then turned-on by surprise

So, the likely root cause of the associate’s damaged thumb is that he simply needed a table, there wasn’t one around, so he used a conveyor as a table. To eliminate further safety incidences, we need to provide tables at the appropriate stations or provide portable, light tables for the associates to use and also update and a greater focus on safety training. Also, look into preventative maintenance standard work.

I came up with a different root cause, as I followed along. (I inserted the question, “Why did the conveyor turn on by surprise?” That took me down a different path.) So be aware of that. Having cross-functional representation in the 5 Whys session will be helpful, especially if your scope of knowledge limits your ability to go further/deeper into the analysis. I think it’s OK to come up with different root causes; it drives further discussion and investigation to get to the real  root of the matter. In my mind, it’s possible that there are a couple things that need to be fixed, not just one. You need to understand the impact of each and prioritize improvements accordingly. As the Wikipedia post suggests, it might be a good idea to have some test of necessity and sufficiency at each level of analysis.

For more details – and to ensure that you move the organization from fixing symptoms to fixing the root cause – Eric Ries writes a great post on how to conduct a 5 Whys root cause analysis.

A relentless barrage of “whys” is the best way to prepare your mind to pierce the clouded veil of thinking caused by the status quo. Use it often. -Shigeo Shingo

Staying Ahead of the Competition